Some things which have landed fairly recently and I believe to be well worth a listen. I warn you now that should you be looking for coherence there’s no theme or common genre, just great music in no particular order.

Even though this is from the newly released album Psychedelic Pill Young’s style has remained so constant it makes me feel like I’m 19 again, having just bought the album Harvest on CD for £5 in Fopp and listening to ‘Old Man’ and ‘Heart of Gold’ over and over, until the CD got a bit scratched.  In short the whole album isn’t a disappointment, it could be listened to for the sublime guitar alone.

Japandroids, The House The Heaven Built

Amongst all this instrumental, electro and low-fi 2012 business I’ve been missing proper, play it as loud as you possibly can, rock music. Here’s one for you.

How pretty is this? Reccomended through Youtube a hauntingly beautiful track titled ‘Love’ from the London trio Daughter’s debut EP ‘The Wild Youth’.

Check them out on soundcloud, this song ‘Medicine’ is also incredible.

Sometimes you get sent something at the exact right time: last week an email entitled ‘Human Pyramids!’ landed with me, literally at the moment I was looking for something new to listen to.

Described by it’s composer and creator Paul Russell as ‘joyous post-rock’ the three song demo is a spirited instrumental business, written in scores and purveying jubilant choral remnants, akin to  the likes of The Polyphonic Spree.

Here we go below with the Human Pyramids suggestion, experimental Icelandic band Múm and their 2012 release, Early Birds.

My favourite band in the world is Múm.  When I first heard them around 10 years ago I had a typical teenager-raised-on-metal attitude towards electronic music: boring, predictable, repetitive and  not for me.  Then I heard “Yesterday Was Dramatic – Today Is OK” and very shortly afterwards “Finally We Are No One”.  Everything changed.  I was blown away, it was like nothing I had ever heard. Beautiful & surprising, it felt like I was being transported somewhere different. Somewhere better.  And so started my love affair with Icelandic music, which is as strong today as it was when I was wearing Machine Head t-shirts..

Múm have released 3 albums since then and I have been buying them on the day of release every time.  The release of “Early Birds” in June was no different.   But wait, its no longer released through Fat-Cat, and its a collection of “lost songs” from 1998-2000?  When I hear phrases like “lost songs” I get scared.  I imagine its the kind of thing bands use to pad out ropey box sets. Why did they get lost?  If they were so good why didn’t they come out at the time? Its obviously filler.  But I bought it anyway and I was wrong, very wrong.

These 15 songs show a band experimenting, with potential and most importantly, a band having fun.  There is an naïvety and excitement that Arab Strap touched upon in they’re poppier moments. There is the vastness that matches Sigur Rós or Mogwai, and most importantly, there is no filler.  It might even be my favourite Mum album.” 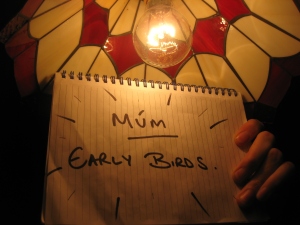 This is a sampler of the 15 tracks, they are pretty enthralling… 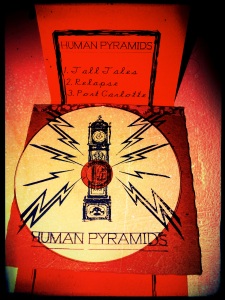 Human Pyramids! was a move for West Lothian based Russell from writing electronic music:“I wanted to create an album with no electronic sounds.  No samples.  No cheating.  To stop reaching for the drum machines and instead pipe up on a floor tom or a bin lid.  I walked around with a handheld recorder for a while.  I enlisted the help of flat mates, band mates and friends to play things I couldn’t.  I wrote scores for the first time since I left Uni.” .

It caught my attention quickly, what good instrumental should – distinctive, uplifting and likeable, plus the songs tell stories. Stream the first fruits of the project below – on bandcamp for a pay what you will download.

It’s so nice when you listen to something new which is genuinely brilliant. Discovered these guys, The Babies, through Brooklyn Vegan and listened to their new album Our House on a Hill, which you can stream in full at Spin. They’re made up of ex-Vivian Girls and Woods members plus bassist Brian Schleyer and the guitar on the track below, Get Lost, is insane.

Having a down day, or in need of some instrumental listening…these Canadian progressive-rock stalwarts are an excellent remedy.

Of the same Canadian rock ilk as Godspeed, couldn’t not share.

TUNE. Of the popular electronic variety.

Another chance discovery, ‘Random’ is a new collaboration between Pearl Jam bassist Jeff Ament, singer-songwriter Joseph Arthur and drummer Richard Stuverud. I found this track via One Little Indian Records and believe it to be great.